Using NOEMA observations and archival data from several space- and ground-based observatories, an international team of astronomers has discovered a unique object in the early Universe that provides a crucial link between star-forming galaxies and the emergence of the earliest supermassive black holes. This object is the first of its kind to be discovered so early in the Universe’s history, and had been lurking unnoticed in one of the best-studied areas of the northern sky.

Astronomers have struggled to understand the emergence of supermassive black holes in the early Universe ever since these objects were discovered at distances corresponding to a time only 750 million years after the Big Bang. Rapidly growing black holes in dusty, early star-forming galaxies are predicted by theories and computer simulations, but so far they had not been observed. Now, however, astronomers have reported the discovery of an object — which they name GNz7q — that is believed to be the first such rapidly growing black hole to be found in the early Universe.

“Our analysis suggests that GNz7q is the first example of a rapidly-growing black hole in the dusty core of a starburst galaxy at an epoch close to the earliest supermassive black hole known in the Universe,” explains Seiji Fujimoto, an astronomer at the Niels Bohr Institute of the University of Copenhagen in Denmark and lead author of the paper describing the discovery. 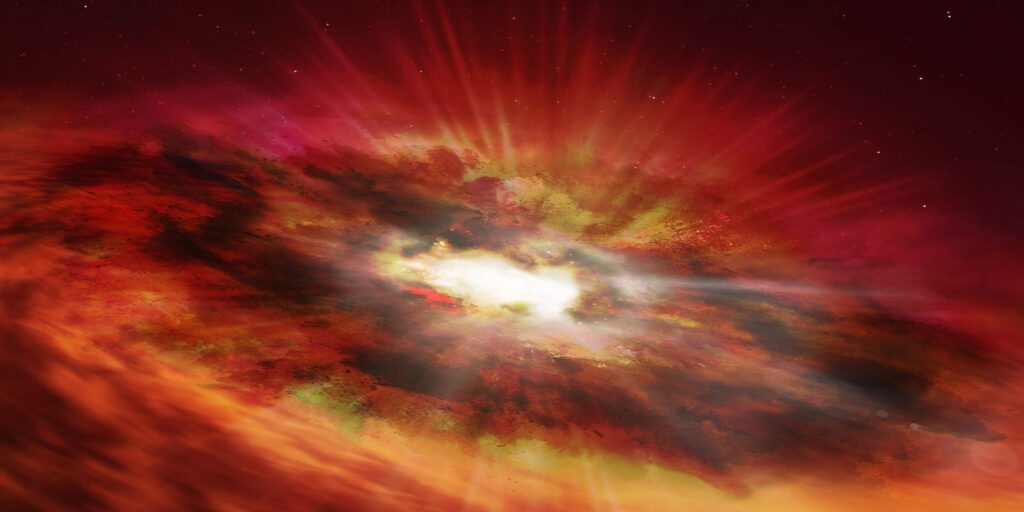 Current theories predict that supermassive black holes begin their lives in the dust-shrouded cores of vigorously star-forming “starburst” galaxies before expelling the surrounding gas and dust and emerging as extremely luminous quasars. Whilst they are extremely rare, examples of both dusty starburst galaxies and luminous quasars have been detected in the early Universe. The team believes GNz7q is a precursor to the supermassive black holes observed in later epochs, and as such it may provide the “missing link” between these two classes of objects.

While other interpretations of the team’s data cannot be completely ruled out, the observed properties of GNz7q are in strong agreement with predictions from cosmological simulations of a rapidly growing black hole still obscured by the dusty core of its accretion disk at the center of a star-forming host galaxy.

As well as GNz7q’s importance to the understanding of the origins of supermassive black holes, this discovery is noteworthy for its location in the Hubble GOODS North field, one of the most highly scrutinised areas of the northern sky. 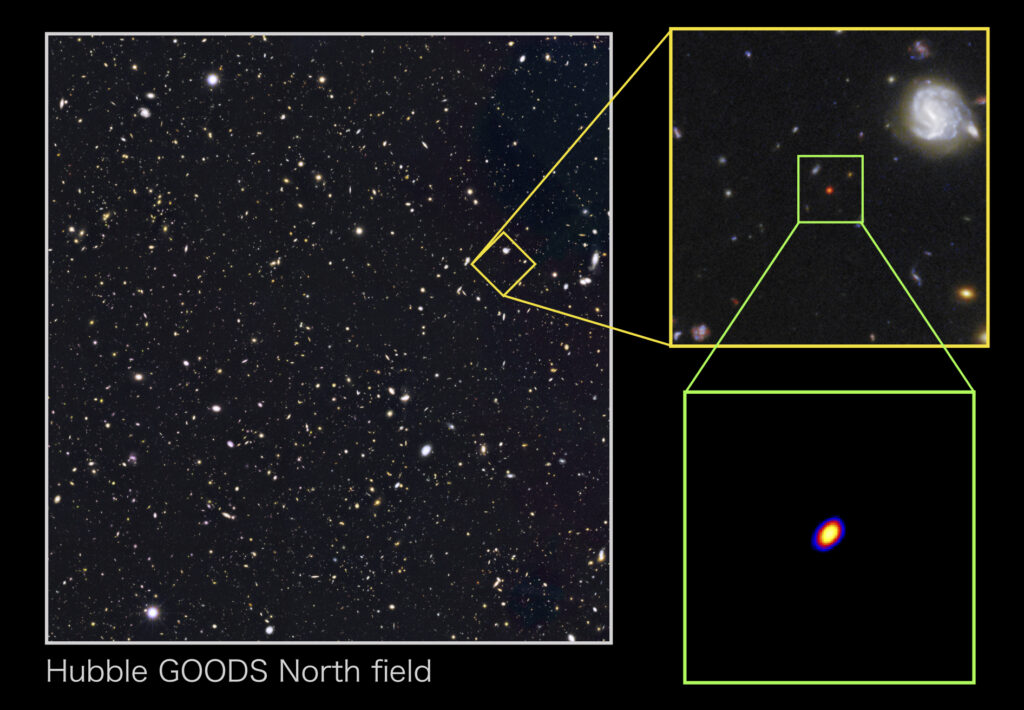 GNz7q, an object discovered approximately 13.1 billion light-years from Earth that shows signs of a rapidly growing black hole inside a dusty star-forming galaxy, is colored in the image by combining data from three color observations by the Hubble Space Telescope. Found in the GOODS-North region (left panel), one of the most well-studied sky regions to date, GNz7q is the red object in the center of the zoom-in image in the right top panel. NOEMA spectroscopy decisively determines the distance of GNz7q by detecting emission from carbon shown in the right bottom panel. Credit：NASA, ESA, G. Illingworth (University of California, Santa Cruz), P. Oesch (University of California, Santa Cruz; Yale University), R. Bouwens and I. Labbé (Leiden University), NOEMA, and the Science Team, S. Fujimoto et al. (Cosmic Dawn Center [DAWN] and University of Copenhagen).

“GNz7q is a unique discovery that was found just at the centre of a famous, well-studied sky field — showing that big discoveries can often be hidden just in front of you,” commented Gabriel Brammer, another astronomer from the Niels Bohr Institute of the University of Copenhagen and a member of the team behind this result. “It’s unlikely that discovering GNz7q within the relatively small GOODS-N survey area was just ‘dumb luck’, rather the prevalence of such sources may in fact be significantly higher than previously thought.” The team now hopes to perform dedicated surveys to systematically search for objects that resemble GNz7q, improving our understanding of how common such quasars were in the early Universe.