The Northern Extended Millimetre Array is one of IRAM’s two observatories. It consists of an array of 12 individual 15-meter antennas. During observations, the antennas function as a single telescope by using a technique called interferometry, providing unparalleled resolving power and sensitivity.

The antennas are located on the Plateau de Bure in the French Alps, 2500 meters above sea level on one of the most extensive European high altitude sites. NOEMA is, to date, the biggest astronomical facility on European soil.

Since the initial construction of the first three antennas in the early 1980s, the facility has been constantly extended and upgraded. Recently, a 12th antenna has joined the array. A new generation of receivers has been installed to significantly increase the sensitivity and therefore the efficiency of the array. 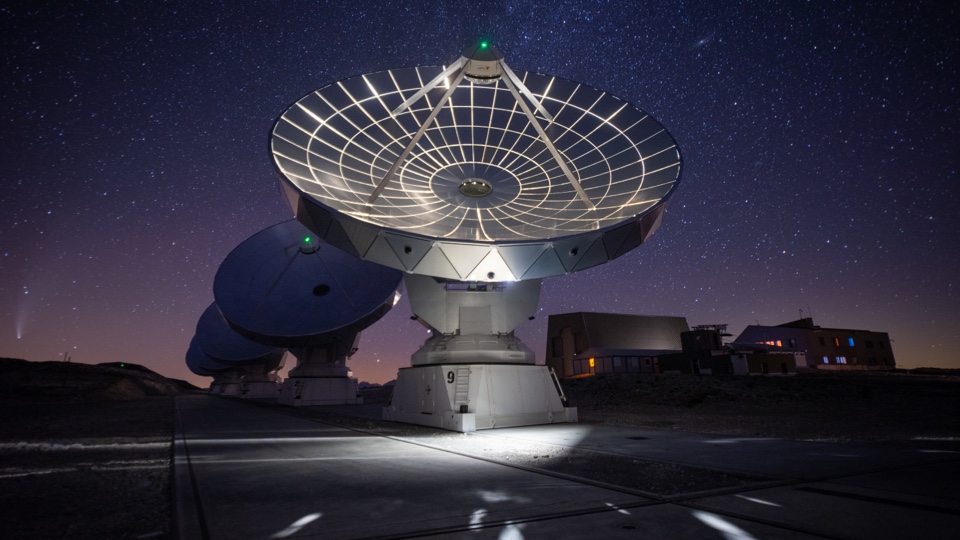 Why so many antennas ?

The antennas are mounted on tracks and can be arranged into different configurations. By spreading out the antennas and pointing them towards the same cosmic source, NOEMA can combine the signals from the individual antennas, achieving a resolving power equivalent to that of a single telescope with a diameter of 1.7 kilometers.

The signals received by each individual antenna are then combined by a supercomputer, using a technique called interferometry. The resulting images of the astronomical source, be it a star, a galaxy or a planetary system in formation, are of outstanding sensitivity and resolution.

Due to the complexity of such an advanced antenna array system, only IRAM’s operators are able to perform these observations. Our technical teams change the configuration of the 12 antennas, operating the array like a variable lense camera that zooms in and out of cosmic objects and captures the tiniest details.

To obtain a complete image of a cosmic object, interferometry uses the earth’s rotation, which slowly turns the antennas with respect to the source, revealing it’s structure. After several hours of observation, our astronomers are able to reconstruct a high angular resolution image of a cosmic object and study its detailed morphology.

Three fun facts to better understand the precision, power and complexity of the technology that powers NOEMA.

Just enough power to light a bulb for 10 seconds

This is the amount of energy NOEMA’s highly sensitive instruments would collect if they were to observe the sky for the entire age of the universe.

Billions of calculations per second

To combine the signals collected by the 12 antennas, NOEMA's electronic equipment processes every day the equivalent of the daily Internet traffic of a country like France.

The size of a regular computer screen

NOEMA's spatial resolution is so high that it could detect your computer screen from a distance of over 500 kilometers.

The most powerful radio astronomy observatory in the Northern Hemisphere