Black holes swallow all light and are therefore invisible. What sounds plausible is fortunately a little different in practice for astronomers. Because black holes are surrounded by shining gas discs and therefore stand out from the dark background, similar to a black cat on a white sofa. In this way, the Event Horizon Telescope has now succeeded for the first time in photographing a black hole. This worldwide network of eight ground-based radio telescopes focused on the galaxy Messier 87, about 55 million light years away. Researchers from the Max Planck Institute for Radio Astronomy and the Institute for Radio Astronomy in the Millimetre Range (IRAM) are also involved in the observation.

In April 2017, the scientists linked eight telescopes around the globe for the first time, thus forming a virtual telescope with an aperture almost as large as the diameter of the Earth. Very Long Baseline Interferometry (VLBI) is the name of this technique, in which the signals of the individual antennas are superimposed. This synchronization takes place with the aid of high-precision atomic clocks accurate to the nanosecond. An extreme angular resolution of less than 20 micro arc seconds can be achieved; if our eyes had such a power, we could see the individual molecules in our hands.

The network of this so-called Event Horizon Telescope (EHT) included the 30-meter IRAM mirror in Spain and the APEX telescope in Chile, in which the Max Planck Institute for Radio Astronomy is involved. In 2017 alone, the telescopes recorded a total of about four petabytes of data – such a large amount that postal transport is actually faster and more efficient than sending the data via the Internet. The measurement data were calibrated and evaluated at the Max Planck Institute for Radio Astronomy in Bonn using a supercomputer, the correlator. 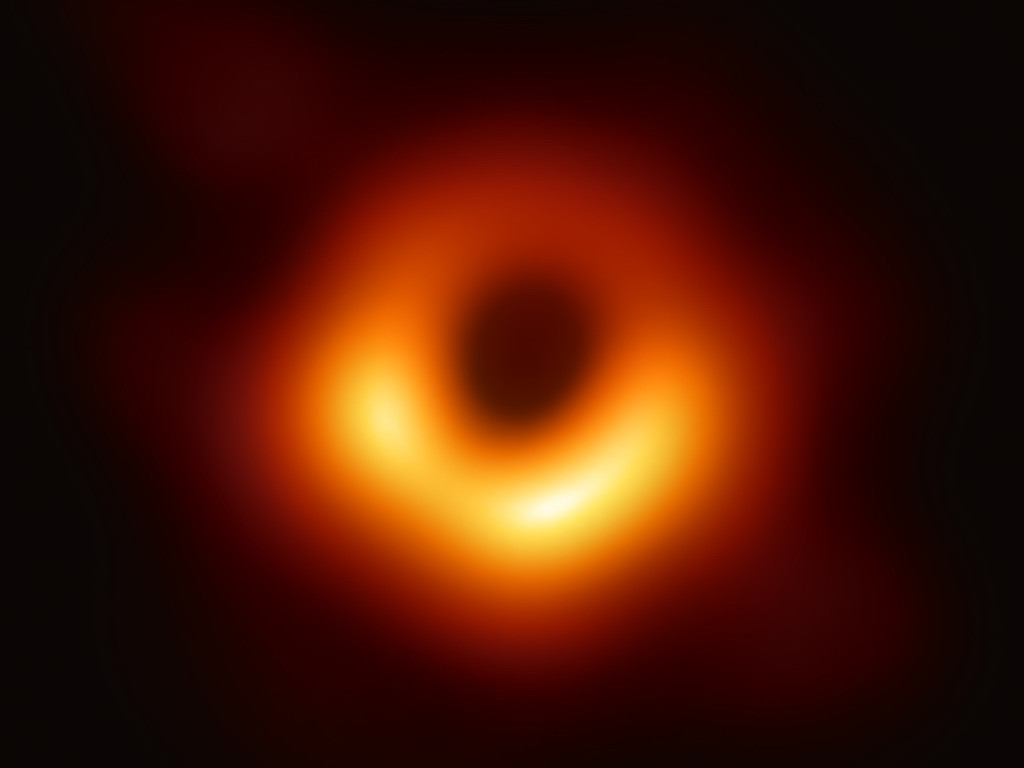 View of a mass monster: this image is the first direct visual evidence of a black hole. This particularly massive specimen is at the centre of the massive galaxy Messier 87 and was recorded with the Event Horizon Telescope (EHT), a network of eight ground-based radio telescopes distributed around the globe. © EHT Collaboration

“For the first time, the results give us a clear view of a supermassive black hole and mark an important milestone in our understanding of the fundamental processes that determine the formation and evolution of galaxies in the universe,” says Anton Zensus, Director at the Max Planck Institute in Bonn and Chairman of the EHT Collaboration Council. Zensus said it was remarkable that in this project astronomical observations and theoretical interpretations led faster than expected to the expected result.

According to IRAM Director Karl Schuster, the success is based on “decades of European expertise” in millimeter astronomy. “As early as the 1990s, the Max Planck Institute in Bonn and our institute with its two observatories demonstrated both technically and scientifically that we have a unique method with high-resolution radio observations to analyze the immediate surroundings of supermassive black holes. IRAM, an institution co-financed by the German Max Planck Society, the French CNRS and the Spanish Instituto Geográfico Nacional actively participated in the campaign with its 30-meter telescope. With its location in Europe and its extraordinary sensitivity, this telescope played a decisive role in the success of EHT observation.

The heart of the supermassive galaxy M 87 has two special characteristics that make it a suitable candidate for the project: Thanks to its unusual size and its relative proximity to Earth, it is easily visible, making it a perfect object of study for astronomers, who, with the global telescope network, finally have an instrument to observe such an exotic object directly.

The regions around supermassive black holes are exposed to the most extreme conditions we know of in space. Black holes are fascinating cosmic objects that comprise an incredible total mass within a tiny area of space. Their mass and thus their gravitational pull are so large that even light cannot escape them. Therefore they remain black – and it is impossible to perceive them directly.

The only way to see black holes is to reproduce their “shadow”. This is caused by the extremely strong diffraction of the light – just before it irrevocably disappears into the black hole. High-resolution radio observations in the millimeter wave range allow astronomers to penetrate to the edges of black holes, undisturbed from dense dust and gas clouds.

The image now published was obtained at a wavelength of 1.3 millimetres and clearly shows a ring-shaped structure with a dark central region – the shadow of the black hole. Around this very massive and compact object, a hot gas plasma moves at high speeds. The ring-shaped structure on the image is nothing other than the strongly heated matter around the mass monster, whose light is deflected and amplified by itself like a lens. After a journey of around 55 million light years, it meets the telescopes of the EHT network.

The IRAM 30-meter Telescope near Granada (south of Spain). With its location in Europe and its extraordinary sensitivity, the facility played a decisive role in the success of EHT observations. Credit: IRAM, K. Zacher

“For many decades, we were only able to indirectly detect black holes,” says Michael Kramer, Director at the Max Planck Institute for Radio Astronomy. Then, a few years ago, detectors measured gravitational waves for the first time and made the effects of black holes on space-time audible when they merged. “Now we can finally see them and have the opportunity to study these exotic objects and their extreme space-time curvature with all their fascination in a unique way,” says the scientist, one of the main people responsible for the BlackHoleCam project as part of the EHT with its approximately 200 researchers.

The observations continue. Since the end of 2018 NOEMA, the second IRAM observatory in the French Alps, has also been part of the worldwide network. With its twelve highly sensitive antennas, NOEMA will be the EHT’s most powerful telescope in the northern hemisphere. “Thanks to NOEMA, we will enter a new sensitivity range and gain even more fascinating insights,” says Karl Schuster.

For Anton Zensus, this success means a break in astronomy. “In the future, researchers will clearly remember a time before and after this discovery far beyond our field of work,” says the Max Planck Director. In his opinion, astronomers will better understand the galactic centers and gain a complete picture of the formation and evolution of active galaxies. In addition, the general theory of relativity will be put through its paces. “Black holes are an ideal laboratory for measurements under strong gravity.”