Eight years after its first antenna was inaugurated in 2014, the major astronomical project is now complete. NOEMA consists of twelve 15-meter antennas that can be moved along tracks up to a distance of 1.7 kilometers, making it a powerful new tool for astronomical research. Its resolving power as well as the sensitivity of its array enable scientists to collect light that has travelled for up to 13 billion years before reaching Earth.

NOEMA is the culmination of over 40 years of European scientific collaboration. Established in 1979 by the CNRS in France and the MPG in Germany, and joined in 1990 by Spain’s IGN, IRAM is a world leader in the field of millimeter radio astronomy. NOEMA is now its flagship instrument, and the most powerful millimeter radio telescope in the Northern Hemisphere.

Its antennas are equipped with very high sensitivity receivers that operate at the quantum limit using a technique called interferometry: the antennas are all pointed towards the same region of space and the signals they receive are then combined by means of a supercomputer. This gives them a resolving power similar to that of a huge single telescope with a diameter covering the entire array.

By altering the configuration of the antennas, astronomers can ‘zoom in’ on a celestial object to observe its details. The different configurations can extend over a distance ranging from a few hundred metres to 1.7 km, enabling the array to work like a giant camera equipped with a zoom lens. The more extended the configuration, the more powerful is the zoom: NOEMA’s maximum spatial resolution is so high that it would be able to detect a mobile phone at a distance of over 500 kilometres.

Equipped with pioneering technologies, it can carry out what scientists call multi-line observations, i.e. the ability to detect a large number of molecular and atomic signatures simultaneously. These new observing capabilities, combined with high sensitivity and very high spectral and spatial resolution, make NOEMA a unique instrument for investigating the complexity of interstellar matter and of the building blocks of the Universe. 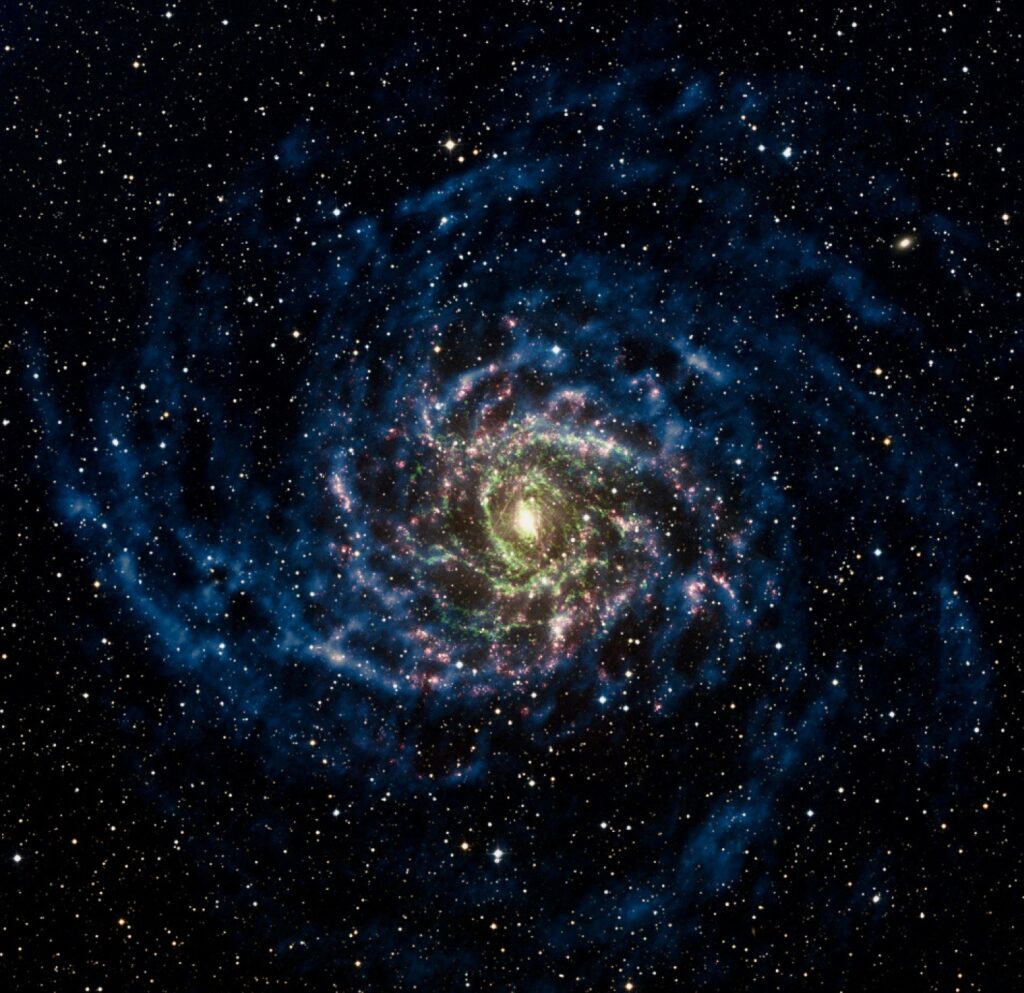 The spiral galaxy IC342 in the constellation of Camelopardalis. NOEMA revealed the presence of molecular gas throughout the multiple spirals and filaments, providing evidence that the galaxy is dotted with intense bursts of star formation. Credits: IRAM/VLA/Mayall/DSS2/A. Schruba

NOEMA provides scientists from France, Germany and Spain with preferential access and the opportunity to carry out unparalleled research. In total, IRAM supports over 5,000 scientists from all over the world. NOEMA enables them to study the Universe’s cold matter, which is at only a few degrees above absolute zero. With the NOEMA antennas, scientists analyse the formation, composition and dynamics of entire galaxies, of stars in formation and at the end of their lives, and of comets and the environment of black holes, aiming to solve the most fundamental questions in modern astronomy.

NOEMA has already made major discoveries and produced some sensational results. It has observed the most distant galaxy known to date, which formed shortly after the Big Bang. Only recently, it measured the temperature of the cosmic background radiation at a very early stage of the Universe, a world first that should help to identify and better constrain the effects of dark energy. This year, NOEMA also discovered the first known example of a rapidly-growing black hole in the dusty core of a starburst galaxy at an epoch close to the earliest supermassive black hole known in the Universe. The observatory is also responsible for the most recent discoveries of molecules in disks around young stars, which are major breeding grounds of planets.

In addition, NOEMA is a member of the Event Horizon Telescope (EHT) consortium, which in 2019 published the very first image of a black hole, and then in early 2022 that of the black hole at the centre of our own Galaxy. NOEMA carried out its first observations for the consortium in 2021 and then again in 2022. With its twelve extremely sensitive antennas, it provides the EHT global array with unmatched spatial resolution and sensitivity. Together with IRAM’s second radio observatory, the 30-meter telescope in Spain, NOEMA will enable the EHT to produce animations with even greater detail. Both facilities are of critical importance for the EHT collaboration, and for the study and understanding of the physics of black holes.

Today, NOEMA has been inaugurated in the presence of Antoine Petit, President and CEO of the CNRS, Martin Stratmann, President of the MPG, Rafael Bachiller, Director of the Observatorio Astronómico Nacional of the IGN, Karl Schuster, IRAM Director, Stéphane Guilloteau, Chairman of the IRAM Steering Committee, and Reinhard Genzel, 2020 Nobel Prize in Physics and member of the IRAM Steering Committee.