What happens when a dying star flies too close to a supermassive black hole?

According to University of Maryland astronomer Igor Andreoni, several things happen: first, the star is violently ripped apart by the black hole’s gravitational tidal forces – similar to how the Moon pulls tides on Earth but with greater strength. Then, pieces of the star are captured into a swiftly spinning disk orbiting the black hole. Finally, the black hole consumes what remains of the doomed star in the disk. This is what astronomers call a tidal disruption event (TDE).

But in some extremely rare cases, the supermassive black hole launches “relativistic jets” – beams of matter traveling close to the speed of light – after destroying a star. Andreoni, who is a postdoctoral associate in the Department of Astronomy at UMD and NASA Goddard Space Flight Center, discovered one such case with his team in the Zwicky Transient Facility (ZTF) survey in February 2022. After the group publicly announced the sighting, the event was named “AT2022cmc.” The team published its findings in the journal Nature on November 30, 2022.

“The last time scientists discovered one of these jets was well over a decade ago,” said Michael Coughlin, an assistant professor of astronomy at the University of Minnesota and co-lead on the project. “From the data we have, we can estimate that relativistic jets are launched in only 1% of these destructive events, making AT2022cmc an extremely rare occurrence. In fact, the luminous flash from the event is among the brightest ever observed.”

Before AT2022cmc, the only two previously known jetted TDEs were discovered through gamma-ray space missions, which detect the highest-energy forms of radiation produced by these jets. As the last such discovery was made in 2012, new methods were required to find more events of this nature. To help address that need, Andreoni and his team implemented a novel, “big picture” tactic to find AT2022cmc: ground-based optical surveys, or general maps of the sky without specific observational targets. Using ZTF, a wide-field sky survey taken by the Samuel Oschin Telescope in California, the team was able to identify and uniquely study the otherwise dormant-looking black hole. 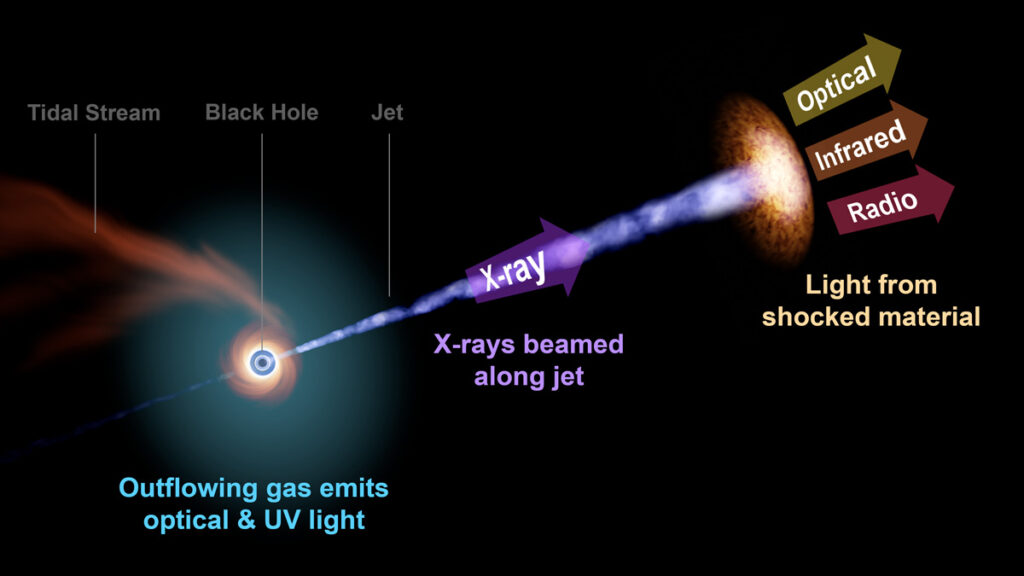 “We developed an open-source data pipeline to store and mine important information from the ZTF survey and alert us about atypical events in real time,” Andreoni explained. “The rapid analysis of ZTF data, the equivalent to a million pages of information every night, allowed us to quickly identify the TDE with relativistic jets and make follow-up observations that revealed an exceptionally high luminosity across the electromagnetic spectrum, from the X-rays to the millimeter and radio.”

Following the initial detection of this TDE, the NOEMA obervatory followed up on its brightness at different frequencies within only hours/a few days of the initial detection and subsequently monitored its evolution over days and weeks and can do so over the next months or even years. Melanie Krips, the scientific coordinator at NOEMA, emphasizes that the great flexibility and sensitivity of observatories such as NOEMA are indispensible and vital in revealing the underlying physical processes at play in these kind of events.

Thus, the researchers believe that AT2022cmc was at the center of a galaxy that is not yet visible because the light from AT2022cmc outshone it, but future space observations may unveil the galaxy when the transient eventually disappears.

It is still a mystery why some TDEs launch jets while others do not seem to. From their observations, Andreoni and his team concluded that the black holes in AT2022cmc and other similarly jetted TDEs are likely spinning rapidly so as to power the extremely luminous jets. This suggests that a rapid black hole spin may be one necessary ingredient for jet launching – an idea that brings researchers closer to understanding the physics of supermassive black holes at the center of galaxies billions of light years away.

“Astronomy is changing rapidly,” Andreoni said. “More optical and infrared all-sky surveys are now active or will soon come online. Scientists can use AT2022cmc as a model for what to look for and find more disruptive events from distant black holes. This means that more than ever, big data mining is an important tool to advance our knowledge of the universe.”

The paper, “A very luminous jet from the disruption of a star by a massive black hole”, was published in Nature on November 30, 2022.