At the core of the IRAM observatories’ receiver systems are superconducting devices that perform the actual detection of the millimeter waves coming from space. The IRAM Superconducting Devices group conceives and develops these powerful detectors.

With a size of less than one micrometer – a thousandth of a millimeter – the superconducting device is the core piece of a telescope’s receiver system, ensuring the transmission of the astronomical signal with as little background noise as possible.

It is where microcosm and macrocosm unite. A tiny but high-precision component that helps to explore the vast cosmos by detecting and forwarding light that has travelled up to 13 billion light years. 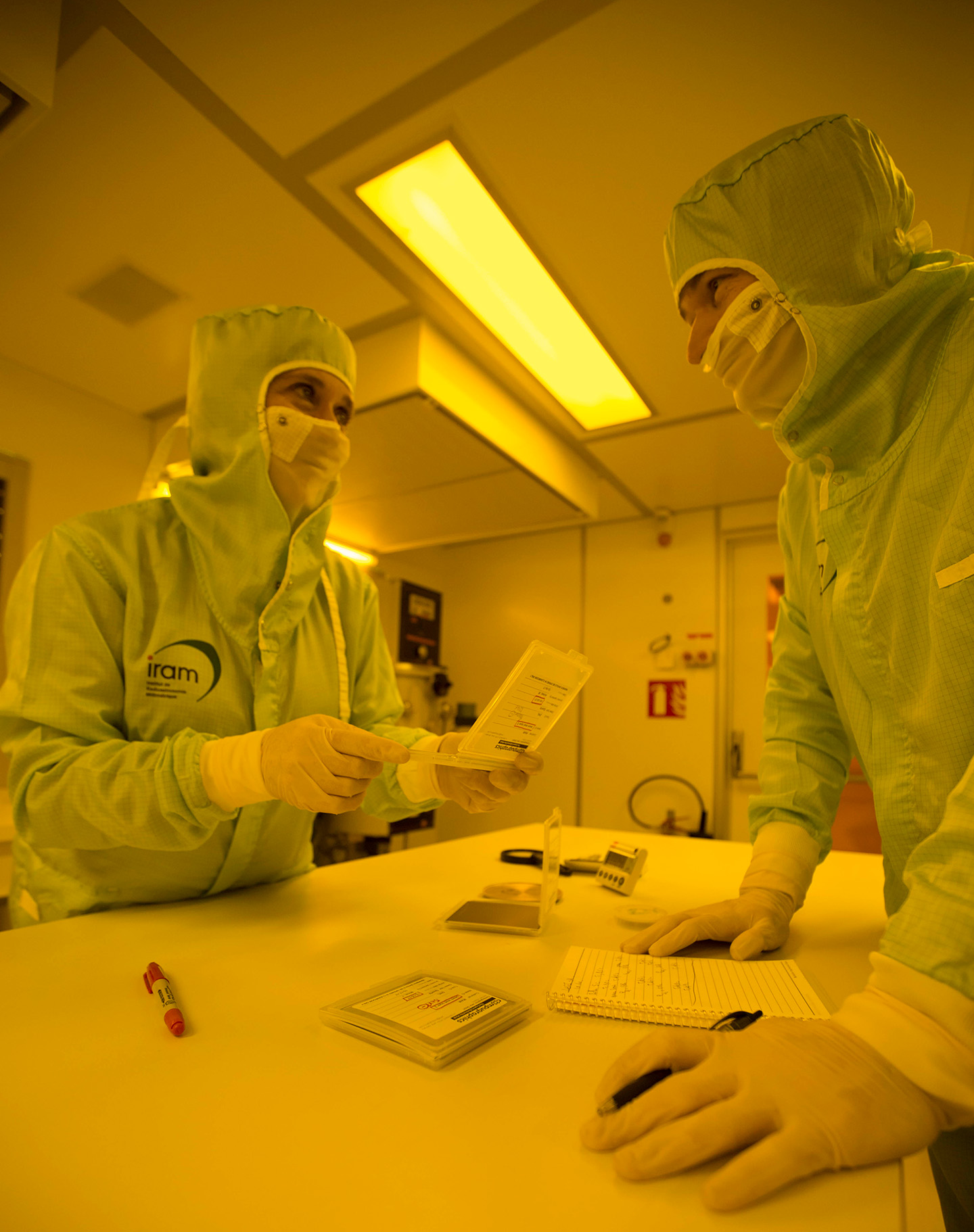 The main device that is produced is a so-called SIS junction. This is a sandwich of superconducting-insulator-superconducting material, made of alternatively niobium (a superconductor), aluminium oxide (an insulator), and again niobium thin films.

Such a SIS junction is an extremely sensitive component, fabricated by the group’s technicians under ultra-high vacuum conditions. Once installed at the core of a receiver system, the junction receives the high-frequency cosmic signal and helps mix it down to intermediate frequencies in the GHz range without losing any information. Converting the high-frequency in a lower frequency signal is crucial for amplifying, processing and finally analyzing these far travelled cosmic signals.

Leaders in their research field, IRAM engineers and technicians build receiver systems that guarantee a perfect and smoothless signal transmission, only affected by unavoidable quantum noise. Thus, their devices are not only used for the IRAM facilities, but also for ALMA receiver systems and the Herschel Space Telescope.

Besides SIS junctions, the group is also involved in the development of kinetic-inductance detector arrays, cutting-edge instruments for the high-sensitivity detection of cosmic light. These novel detectors are based on so-called superconducting resonators which function like tiny guitar strings that change their tone due to the detection of light.

The advantage of these resonators is that it is very easy to ‘listen’ to many of them at the same time, creating a true camera with thousands of pixels. The NIKA2 instrument at the IRAM 30-meter telescope is such a camera. It hosts 2896 of these guitar strings and is today’s largest millimeter-wave camera on sky.

Currently, the group is studying different superconducting materials to make these detectors even better and more reliable, exploring their ultimate physical limits.