The IRAM receiver group develops and maintains cutting-edge instrumentation for both IRAM observatories.

When they reach the surface of an antenna, signals from cosmic sources are extremely weak. Their weakness is such that the IRAM 30-meter telescope would have to collect them during a period spanning the entire age of the universe (13.7 billion years) to obtain enough energy to power a light bulb for one second.

The signals have thus to be amplified before they can be analysed which is the role of the receiver.

For this purpose, the receivers need to be cooled down to extreme temperatures (cryogenic), about -270 degree Celsius, using closed-cycle coolers. As one of the leaders in the field of high frequency technologies, the group works with ultra-sensitive millimeter-wave superconducting heterodyne mixers and/or low noise amplifiers and covers the whole ~70-375 GHz frequency range. Thus, the group is able to build receiver systems, which guarantee a perfect signal transmission, only affected by unavoidable quantum noise.

The team also supplies devices and builds millimeter-wave receivers for other radio astronomy institutes and has active collaborations with international organisations.

In particular, the group has a very successful record in developing low-noise wideband receivers with state-of-the art performances for its own telescopes (multi-band and multi-beam) and in designing and producing complex receiver systems like the Band 7 cartridge for the ALMA observatory in Chile (73 cartridges were delivered to the ALMA project). 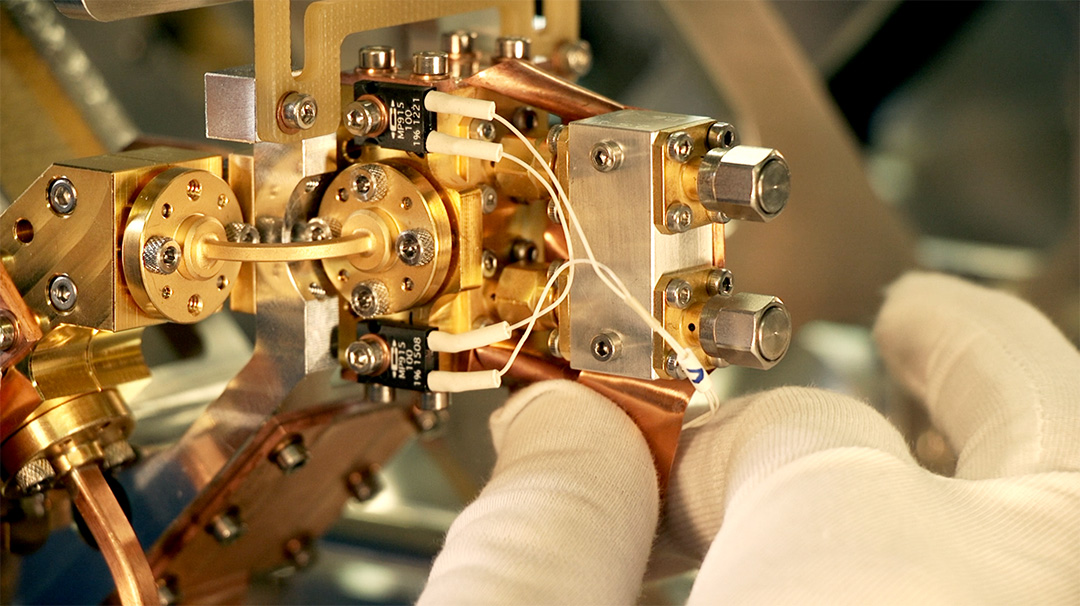 Zoom onto a receiver block —  © IRAM

The group’s engineers and technicians cover all aspects of the millimeter-wave technology, including the design and manufacturing of: